The 10th anniversary of the international festival ‘Nordic Weeks’ 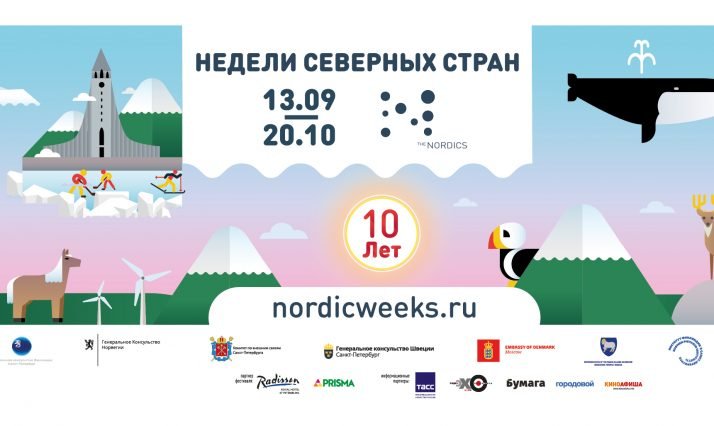 This year the international festival ‘Nordic Weeks’ celebrates its 10-year anniversary. The festival takes place from 13 September to 20 October and presents a diverse programme with bright and interesting events about the art and literature, music and film and history and architecture of the Nordic countries.

For 10 years already the ’Nordic Weeks’ festival has explored the theme of good neighbourly relations and thus brought its most vital idea into reality: The more we know about our neighbours, of their historical and cultural heritage, of their achievements and way of life, of their family traditions and human values – the easier it is for us to find a common language.

The Nordic countries and Saint Petersburg have a lot in common. Through the years this has been demonstrated again and again at the festival’s many forums and cultural events. The festival has become one of the most important platforms for exchange of knowledge between Russian and Nordic experts – thus bringing professionals in various fields together. The festival has become a resource from which everyone can draw inspiration – be it in open discussions, masterclasses, exhibitions or by meeting famous writers, artists, musicians, designers and architects, film directors, public figures or scientists from the Nordic countries.

Breaking boundaries and opening doors into the world of universal human values are something film festivals are especially known for. This year, the film festival ‘Message to Man’, from 14 to 21 September, presents the Film avantgarde of the Nordic Countries with viewings, exhibitions and artist talks.

From 16 to 20 October the film theme continues with the Nordic Film Festival. Here the best new Nordic films will be screened. This includes films from Iceland, Norway, Sweden, Denmark, Finland and additionally films from the autonomous regions of Greenland, Åland and the Faroe Islands.

From 21 September to 6 October the exhibition ‘Hey, it’s me!’ will take place – an exhibition contemplating the theme of Nordic children’s literature and children’s reading experience. There will be artist talks, master classes and literature readings.

21th of September in the General Staff Building, the Nordic countries take part in this year’s international festival ‘Discover your Europe in the Hermitage’. There will be a unified Nordic information stand and individual national events. The festival marks its 5th anniversary and is attended by the EU Consulates General and Cultural Institutes in Saint Petersburg in collaboration with the Delegation of the European Union to Russia.

The Consulate General of Norway invites all to join the ecological competition ‘Clean Games’. The objective of the competition is to collect litter and sort it.

On 3-4 October an international conference is held on the conservation of wooden architecture as an important cultural heritage.

From 7 till 10 October the Consulate General of Finland and the Danish Cultural Institute present a unique series of concerts and artist talks. ‘A Musical Heritage’ is devoted to the 100th birthday of the bass singer and composer Kim Borg – a renowned opera singer of his time, born in Finland, lived in Denmark and gave performances across the globe. Matti Borg, son of the great singer and an opera singer himself, will talk about this father’s life and work. The great musical heritage of Kim Borg will be commemorated by the famous soprano Gitta-Maria Sjöberg, cellist Tobias van der Pals and pianist Polina Fradkina.

On 10-11 October the question of the day how to transform the waterfronts of Saint Petersburg? The creative eco-urban project ‘Waterfront’ presents their research-based art and development ideas with a well-documented exhibition and invite everyone to join in discussions about further development of the project.

Aside from the unified Nordic programme, each of the participating countries would like to draw attention to their own national programs.

The exhibition at ROSPHOTO by the Danish art photographer Krass Clement, the Finnish play ‘Fillari’ (‘on bicycle’), the music performance of one of the most famous Swedish folk groups ‘Garmana’, an exhibition on Norwegian Children’s Literature, the presentation of a Finnish book about the most important substance of the world: ‘Water’ and a performance at the ‘Vodokanal’ – dealing with the same theme, a forum on renewable energy in Northwest Russia, an exhibition and an academic conference dedicated to the 90th birthday of V.P. Berkov professor at University of Saint Petersburg and author of the Norwegian-Russian dictionaries, a retrospective of the Danish films “Dogma 95”, performances at PetroJazz Social Dance, poetry readings, talks, concerts, exhibitions and much more included in this year’s Nordic Weeks festival.

The year 2019 marks an important date in the relations between Norway and Russia – The 75th anniversary of the Liberation of Northern Norway by the Soviet Army as part of the Petsamo-Kirkenes Offensive. On 25 October a history seminar at the Museum of Political History of Russia will be dedicated to this historic event – including screenings of Norwegian films about the war.

The festival has taken place here in Saint Petersburg since 2010 and is arranged by the Consulates General of Sweden, Finland and Norway, the Embassies of Denmark and Iceland in Moscow, the Finnish Institute and the Danish Cultural Institute in cooperation with the Committee for External Relations of Saint-Petersburg. In 2019 Iceland has the chairmanship of Nordic cooperation and is the coordinator of the festival.

Svetlana Eliseeva, press secretary of the festival, RA ‘Neva’, Telephone: +7-921-967-13-32, eliseeva@ra-neva.spb.ru
The full program of the festival can be found on the site: WWW.NORDICWEEKS.RU and on Facebook and VK under ‘Недели Северных стран’.

The program is subject to changes and additions